Outside of Mexico City, arguably Mexico’s taco capital, one would be hard pressed to find the sheer variety of tacos served in Tijuana’s stands, carts, colectivos and restaurants. The city’s location at the US-Mexico border has made it a point-of-arrival for immigrants throughout the country who brought their regional taco traditions with them, and during Tijuana’s culinary renaissance in the late 2000’s, a number of young chefs began riffing on traditional taco recipes, birthing TJ’s unique and often colorful “modern tacos”.

To the uninitiated, ordering at a busy street taco stand can be intimidating. Don’t be shy, step right up and tell the taquero the quantity, type of taco and what additional toppings you’d like. For example, “Tres tacos de carne asada con todo, por favor”. The requisite radishes and salsas are usually available as self-serve. If you’re really hungry, just order one or two at a time, so that they’re still nice and hot when you devour them. Let the cashier know what you had and pay when you’re finished.

There are hundreds of popular and lesser-known options for tacos throughout the city. Here are ten Tijuana tacos that A Gringo in Mexico has enjoyed and recommends to any and every taco fanatic. Provecho!

(NOTE: The exclusion of the beloved Tacos El Franc is intentional. They get so much attention and press that I thought I’d focus on ten other popular and lesser-known spots for once!) 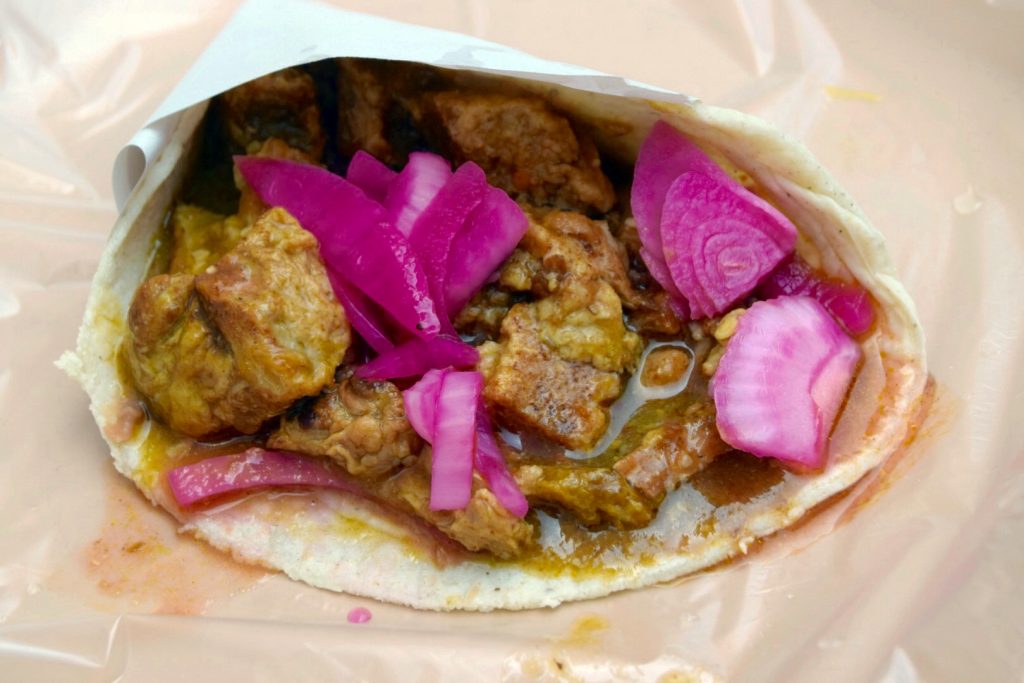 The team behind the wheel of the popular el Centro food truck Tacos Aaron has been preparing tacos de guisados – or tacos varios as they are known in Tijuana – for over 20 years. Their signature guisado, a stew of meat and/or vegetables, is the taco de chicharrón en salsa verde. Generous morsels of fried pork skin, with plenty of meat still attached, are served softened in a piquant, tomatillo-based salsa verde and topped with pickled red onions. Independencia 4500, Soler, 22530 Tijuana, BC, Mexico. 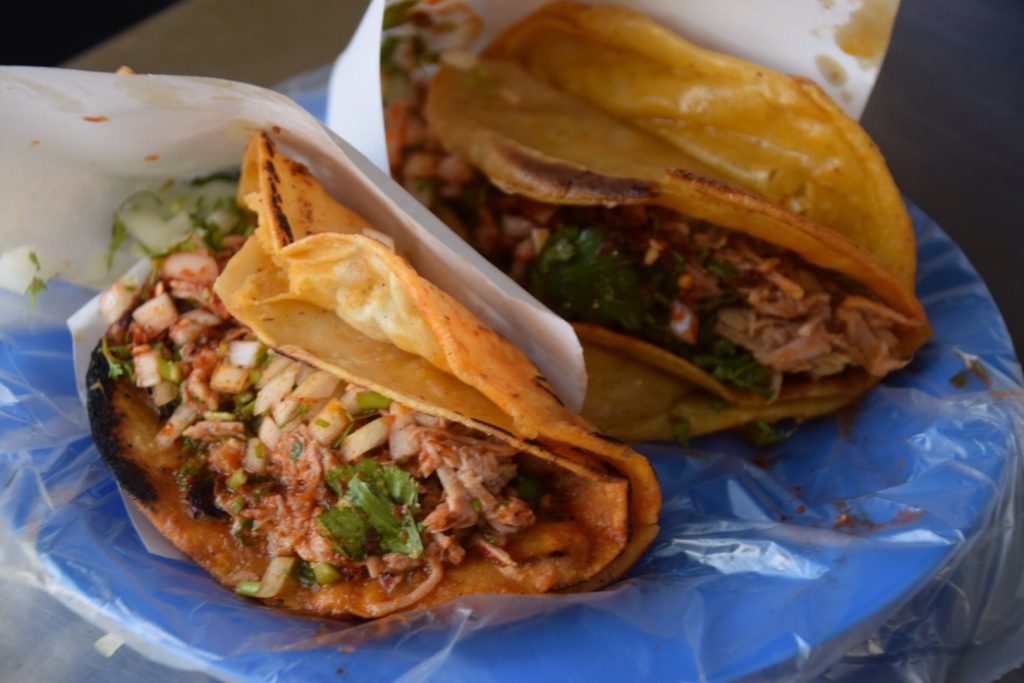 Located outside the city’s Mercado Hidalgo, this popular cart’s taqueros are known for their agility. They make a show of tossing a spoonful of consomé (beef broth) across the span of several feet into an awaiting corn tortilla filled with birria de res (spiced and stewed beef) and tripa (fried portions of beef small intestine) held in the other hand. The tortillas are fried lightly on the griddle in the consomé beforehand, giving them a golden, lightly crunchy texture. Zona Urbana Rio Tijuana, 22010 Tijuana, BC, Mexico.

The Kraken at Tras Horizonte 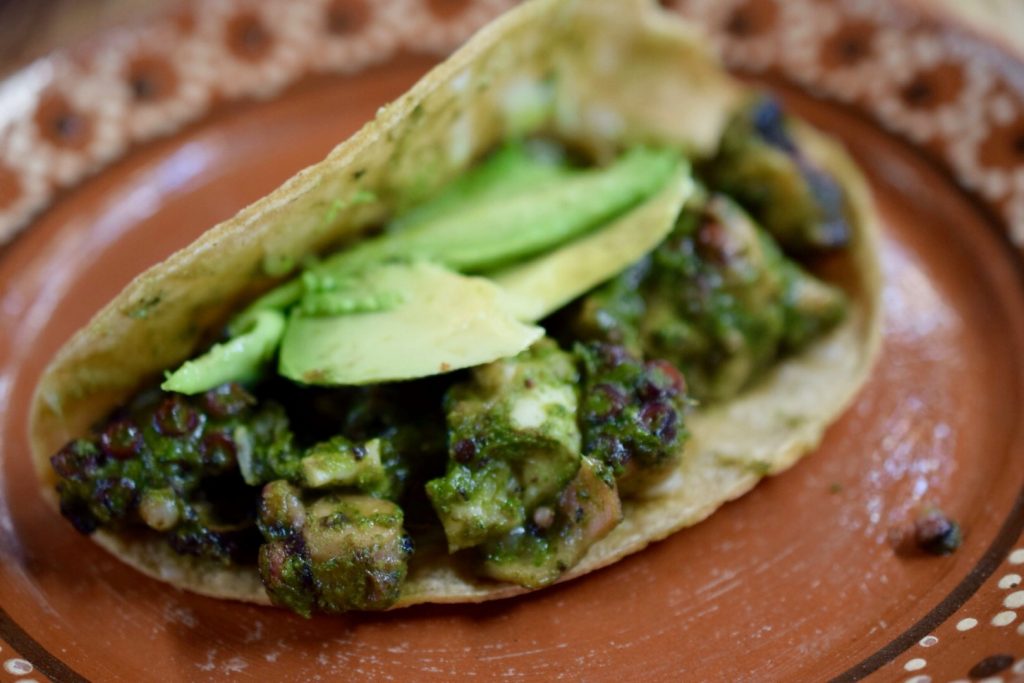 The Kraken taco at Tras Horizonte.

Brothers Pablo and Oso Campos founded their Tacos Kokopelli food cart in 2010 and have since taken up residence at their new restaurant, Tras Horizonte. Fans of their “modern tacos” need not worry, they still do their greatest hits here. The Kraken features octopus marinated in pesto Mexicano, perfectly grilled and served with fresh avocado and a variety of homemade salsas, including pumpkin seed, guava and habanero on a lightly toasted corn tortilla. Avenida Río Colorado, 22015 Tijuana, BC, Mexico. 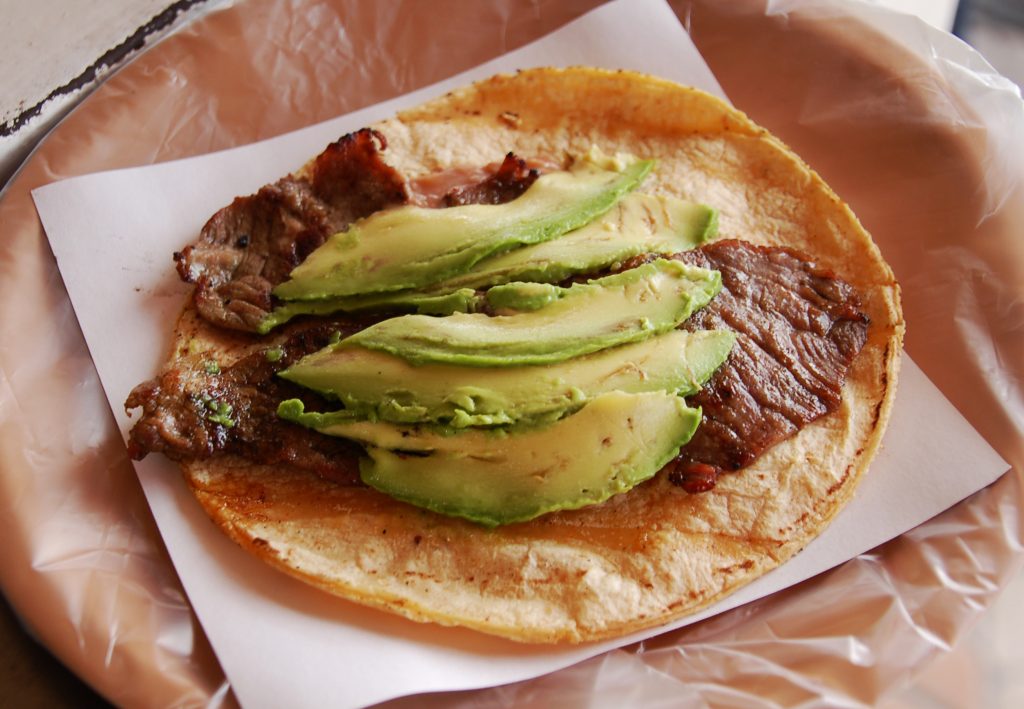 Tacos Don Esteban, in business since 1965, is unique in its use of thinly-sliced New York strip – vs. the typical skirt cut – for its carne asada (marinated and grilled steak). The perfectly seasoned, mesquite-grilled meat is set atop a thin layer of refried beans and topped with avocado slices. When choosing your garnish, make sure to add mayo – a tradition at the taco stand. There are three Tacos Don Esteban locations in TJ from which to choose. Avenida Pio Pico 1230, Zona Centro, 22000 Tijuana, BC, Mexico. 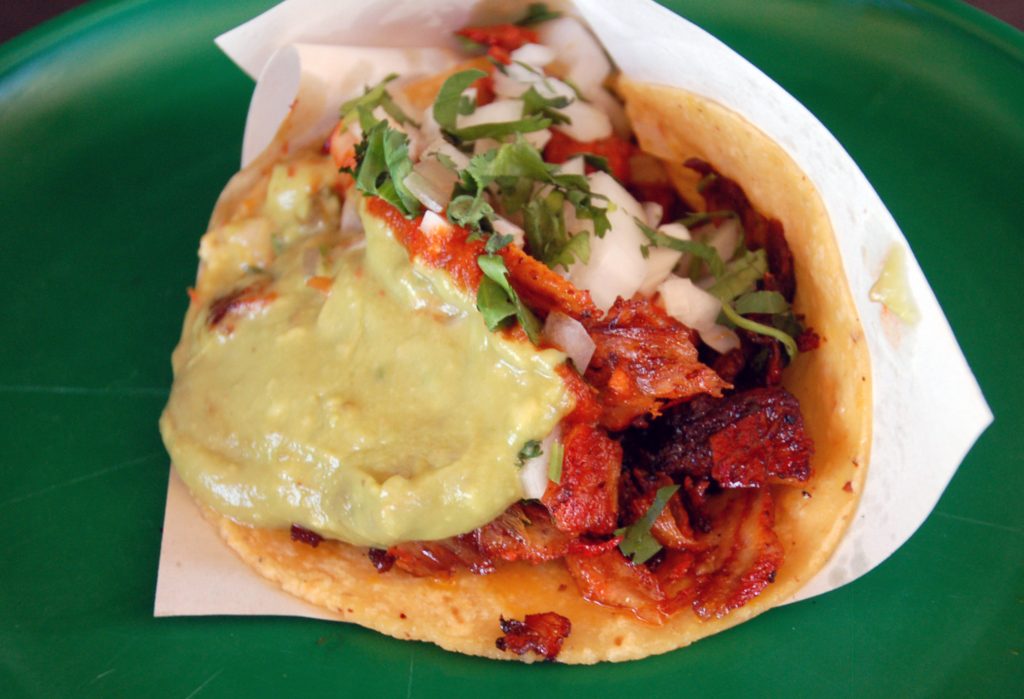 Tijuana’s ‘Taco Alley’ is open 24 hours, making it a popular spot for after-hours revelers. Tacos Tres Las Salsas offer a variety of meat-filled tacos. Their adobada (marinated pork) falls into a waiting warm corn tortilla that the taquero holds under the spit as he shaves off slice after tender slice. Ask for it “con todo”(with everything) and a generous amount of creamy guacamole, onions, cilantro and a spicy red salsa are added. Avenida Guillermo Prieto 2620, Defensores de Baja California, 22044 Tijuana, BC, Mexico. 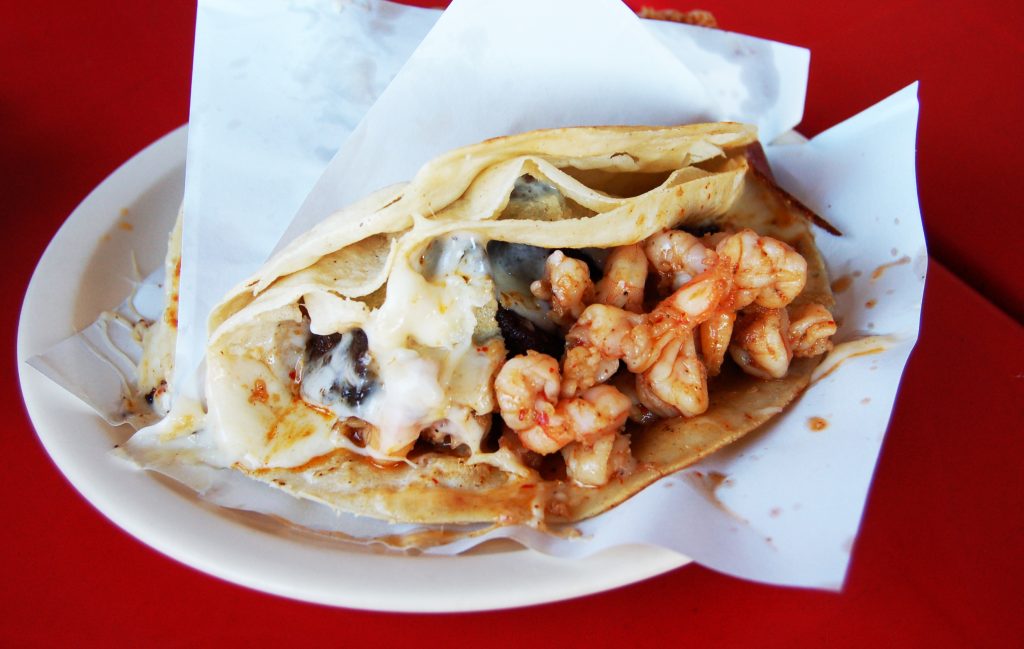 Mariscos el Mazateño is the spot for the best Sinaloan-style seafood tacos in Tijuana. The crowd of locals seated at this open-air restaurant in the Tomas Aquino section of town is testament to its popularity. The El Perrón taco combines generous amounts of succulent grilled Baja California shrimp and crunchy fried pargo (snapper) heaped into two warm, just-made flour tortillas. The taco is finished with cheese from Oaxaca. Calzada del Tecnológico 473, Tomas Aquino, 22414 Tijuana, BC, Mexico. 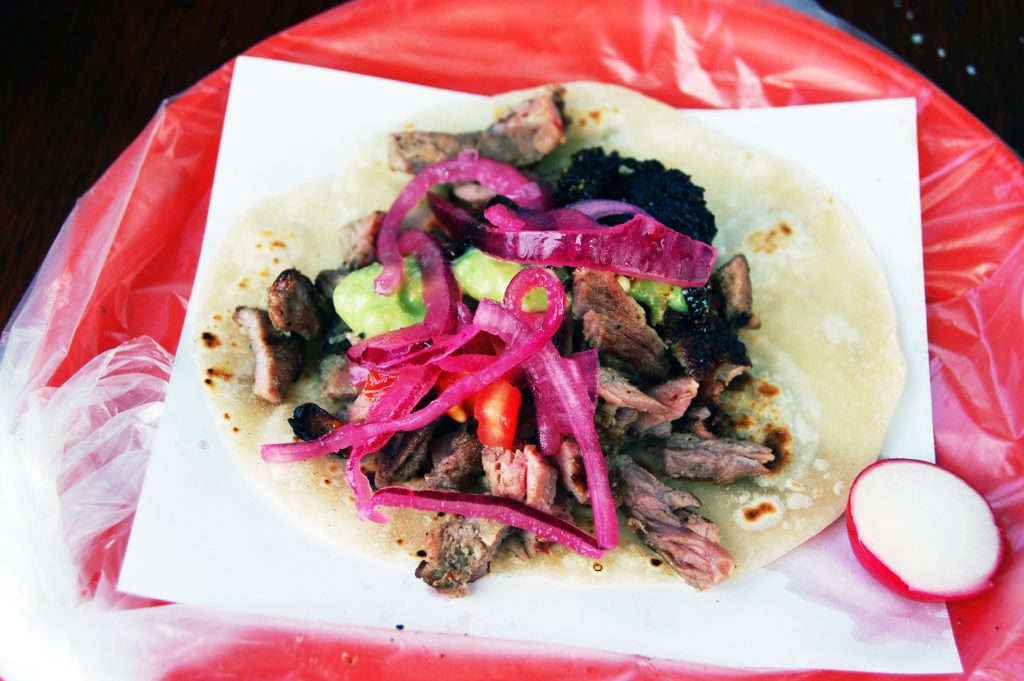 Tacos-n-Todo only serve tacos de carne asada and their piéce de résistance, the taco de costilla de res (beef rib). The taco is served with the bone on the side from which you can gnaw every last morsel of the savory, perfectly seasoned rib meat. Served on a warm flour tortilla and best topped with red onions and salsa roja. There are several cart locations throughout Tijuana. Avenida Lázaro Cárdenas Norte 2652, Maestros Universitarios, Tijuana, B.C,Mexico. 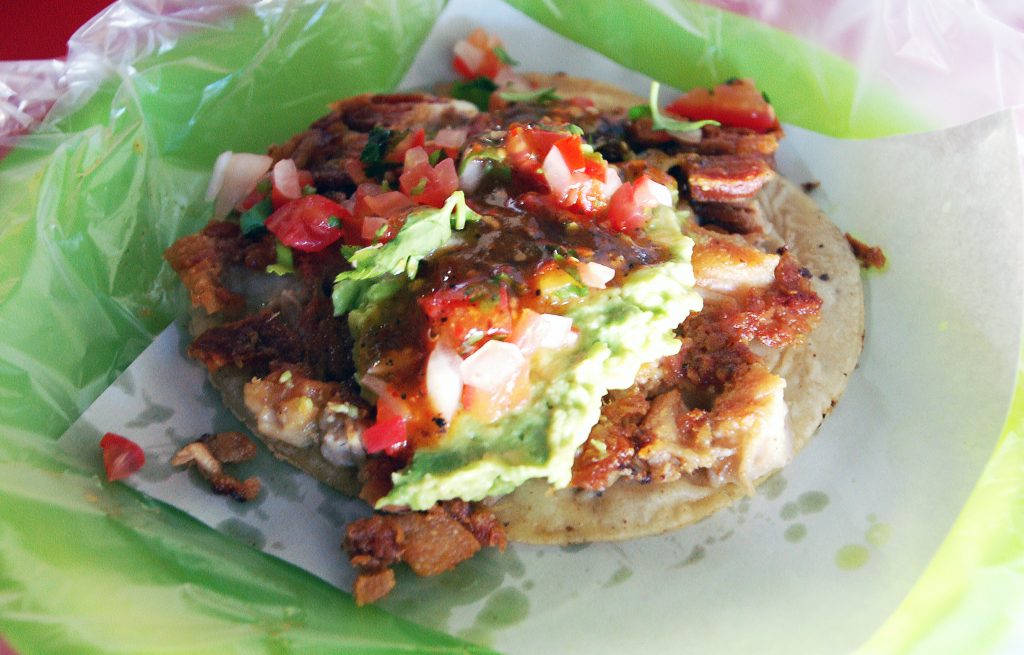 Tío Pepe moved to Tijuana from Guadalajara in 1994 and started serving tortas ahogadas (“drowned” pork sandwiches) from a street cart in Zona Centro. He still sells tortas at his current space as well as a variety of other carnitas dishes. The Chavez taco is crafted using costilla (rib meat) heaped into a warm, house-made corn tortilla. Order it “con todo” (with everything) and fresh guacamole and a chunky, spicy pico de gallo are added. Calle Galeana, Zona Urbana Rio Tijuana, 22000 Tijuana, BC, Mexico. 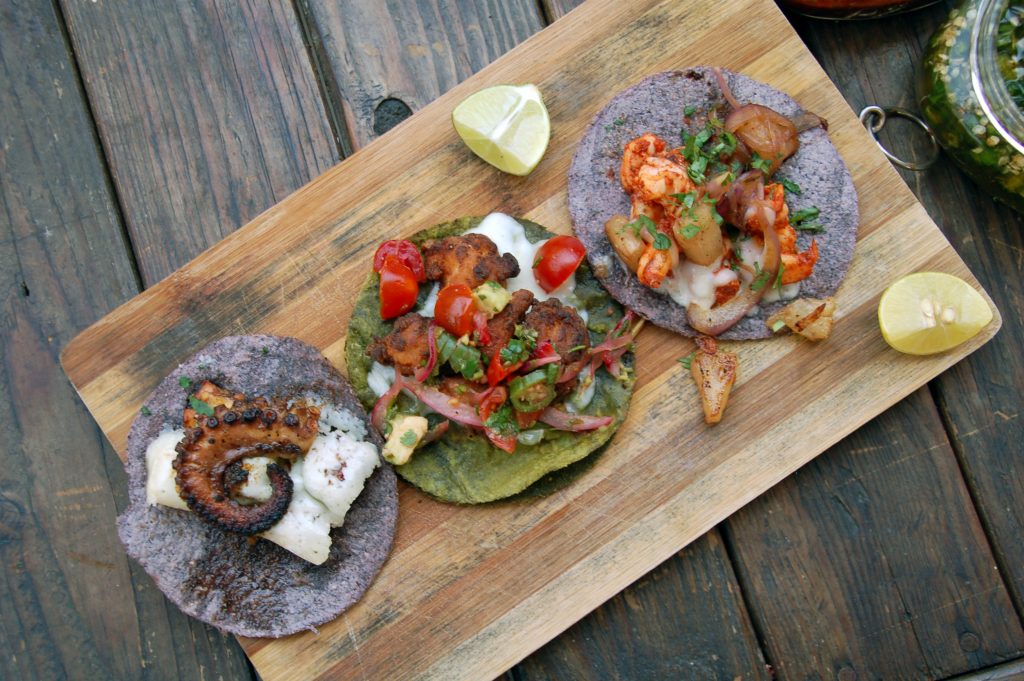 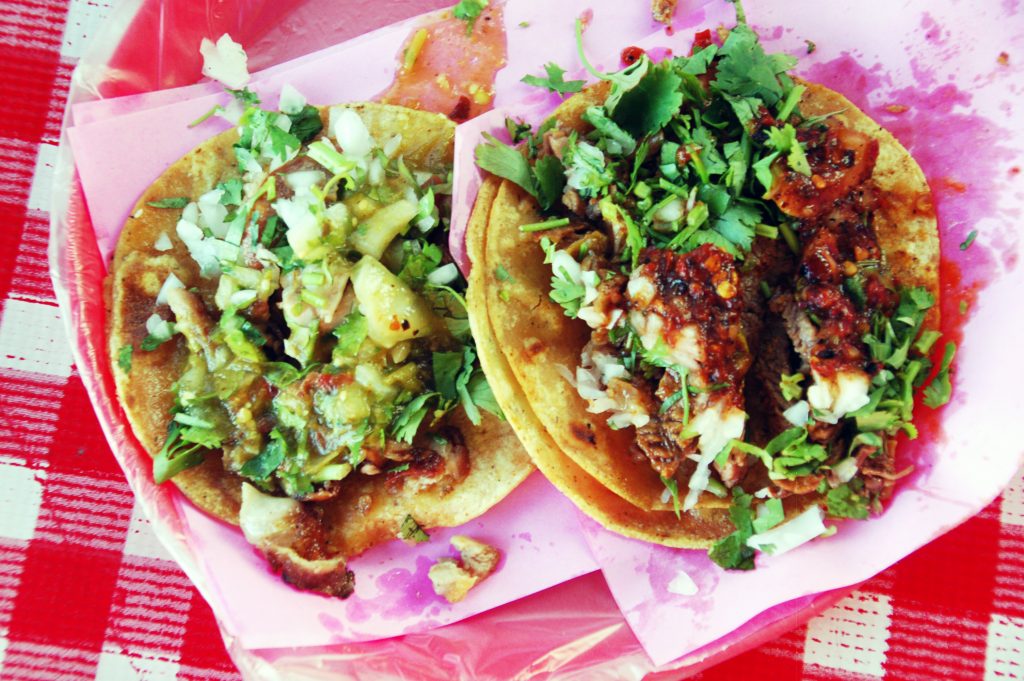 Tacos El Taconazo offers a variety of meat-filled tacos, burritos and tortas. Their tacos of tripa de res (beef small intestine) are a favorite in Tijuana. Cooked until crispy on the outside and soft in the middle, the tripa is extra flavorful as it absorbs the taste of the other meats and offal with which it’s fried. Served on two hot, just-made corn tortillas, order it “con todo” (with everything) and onions, cilantro and a spicy red salsa are added. Calle Galeana, Zona Urbana Rio Tijuana, 22000 Tijuana, BC, Mexico.

Support our Sponsors:
When A Gringo in Mexico drives around Tijuana for our “taco fix”, we do it with confidence, knowing that all of our Mexican insurance needs are covered by Discover Baja Travel Club. For over two decades, they’ve offered the highest-quality Mexican auto insurance at the best prices.