SAN MIGUEL DE ALLENDE, MEXICO – On September 16, 1810 in the small town of Dolores, Guanajuato, Miguel Hidalgo issued the “Grito de Dolores” (Battle Call of Dolores) from a window above the town square. During his impassioned speech, Hidalgo encouraged the Mexican people to rebel against the country’s Spanish colonial government, effectively starting the first Mexican War for Independence.

Among Hidalgo’s co-conspirators that morning was General Ignacio Allende, one of the leaders of the revolution. Today, a new grito is resounding throughout his namesake city to the rest of the world: “Come to San Miguel de Allende for world class cuisine!” And the co-conspirators this time are the restaurateurs, chefs and producers who are increasingly drawn to the region.

The first annual San Miguel de Allende Food Festival was held at the city’s historic Instituto Allende over the weekend of June 23rd to promote and celebrate the city’s growing popularity as a culinary destination. El Gringo and food stylist and photographer Cintia Soto of Cintia Soto Photography were at the event to get the story on who and what is shaping the city’s entry into the milieu that is Mexican cuisine.

“The food scene in San Miguel has evolved very quickly in the last two years,” Daniel Estebaranz, owner of B’ui Restaurant and one of the event organizers shared. “Before, it was good, there were several excellent small, family-owned places. But back then, no one believed that a Mexico City style, chef-focused restaurant would work here.”

“San Miguel was named ‘Best city to live in in the world’ in 2013 by Conde Nast,” Estebaranz continued, “Tourism here increased quickly by about 30%, I believe. Suddenly, there were more people coming here from around the country and the expectation for culinary offerings was raised.”

In 2012, chef Enrique Olvera opened Moxi at the Matilda Hotel just outside the town’s verdant Juarez Park. Having a superstar chef in town fed the new demand for good food and other restaurants opened based on its success.

Besides it’s rising popularity for cuisine, chefs are also drawn to the region for its bounty of fresh produce and proximity to sources for meat in nearby Mexico City and seafood from Mexico’s Pacific Coast.

“There are a lot of farms around San Miguel de Allende who do organic produce,” Estebaranz explained. “There’s also a lot of cheese. People come here from all over the world and make cheese with Italian flair, or in the style of wherever they’ve come from. San Miguel has a little bit of everything.”

Estebaranz and his partners Jorge Alacon and Ricardo Trejo organized the first annual San Miguel Food Festival to promote the city’s new culinary culture. “We wanted to showcase everything from high-end cuisine to street food,” Estebaranz emphasized. “We invited producers from all around Mexico to exhibit. We welcomed anything related to food, art, culture and music.”

We enjoyed roaming the show floors in the beautiful 18th century built Instituto Allende and sampling wares from a number of producers; including mezcals and insects from Oaxaca, cheese from Puebla and wines from the Valle de Guadalupe. Many of the city’s restaurants were also on hand to offer culinary samples on the outdoor VIP patio.

During the event, Chef’s Table lunches and dinners were served to a limited seating of twenty. Cintia and I attended the Sunday Brunch and were joined by foodies from around the country on the festival’s final day.

Three of the region’s top chefs, Juan Emilio Villaseñor, Armando Prats and Enrique Farjeat prepared a stellar five-course meal along with wine and champagne pairings. We enjoyed the food as smoke and smell wafted from a nearby Argentinian barbeque of lamb, pork and cow Monterrey chef Dante Ferrero was preparing for an afternoon cookout. 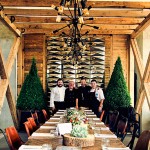 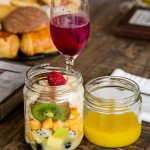 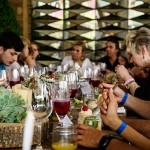 The Chef’s Table at the SMA Food Festival. 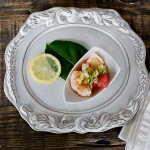 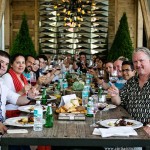 A Gringo in Mexico at the Chef’s Table. 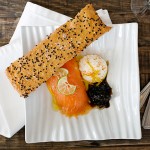 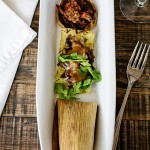 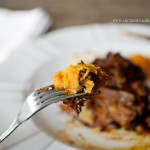 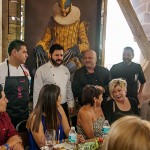 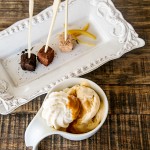 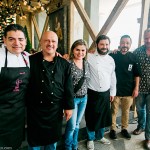 Cintia Soto and A Gringo in Mexico with the chefs.

After a very satisfying and convivial meal, we said goodbye to our hosts and thanked them for a great few days of food and fun. I mentioned to Daniel that my first trip to Mexico was in SMA back in 2003. And that I was touched at how owners and chefs implored us to “…consider this restaurant your home.”

“That’s because restaurants and chefs are in the business of giving,” Estebaranz concluded. “You come here to relax, rest and have a vacation. The mood of the people that serve you is very relaxed, comfortable and gives you the impression of being in your own home and just feeling amazing.”

Organizers plan to hold the San Miguel Food Festival annually, and branch out with smaller events to continue to build awareness of the culinary scene.

Your Gringo In Mexico & Photographer,
Scott and Cintia

DISCLAIMER: The event organizers were gracious enough to reserve and comp two seats for Cintia and I at the Sunday Chef’s Table Brunch. My opinions are my own, and no compensation was received from the restaurant or its affiliates for writing this article.