TIJUANA, B.C. – “My father is from Chihuahua, but my mother and grandmother are Sonoran,” chef Julio Rodríguez began as he welcomed us into Navio Seafood & Drinks. Navio is a bright, smartly designed restaurant located in an otherwise nondescript strip mall on bustling Agua Caliente Boulevard.

Rodríguez showed us to our seats and continued, “My grandmother comes from a small fishing village in Sonora called Yavaros. Since I was a kid, I’ve been in love with the way she and my mother cook. This is where my interest in working with seafood began. We recognize this family connection in some of our dishes here. The smoked tuna we serve, for example, is one of my mother’s recipes from Sonora.”

But while Sonora may provide the bloodline to Rodríguez’s menu, its heart resides solidly in Tijuana; pumping rhythmically like a dropped Nortec beat to the city’s myriad street food offerings. 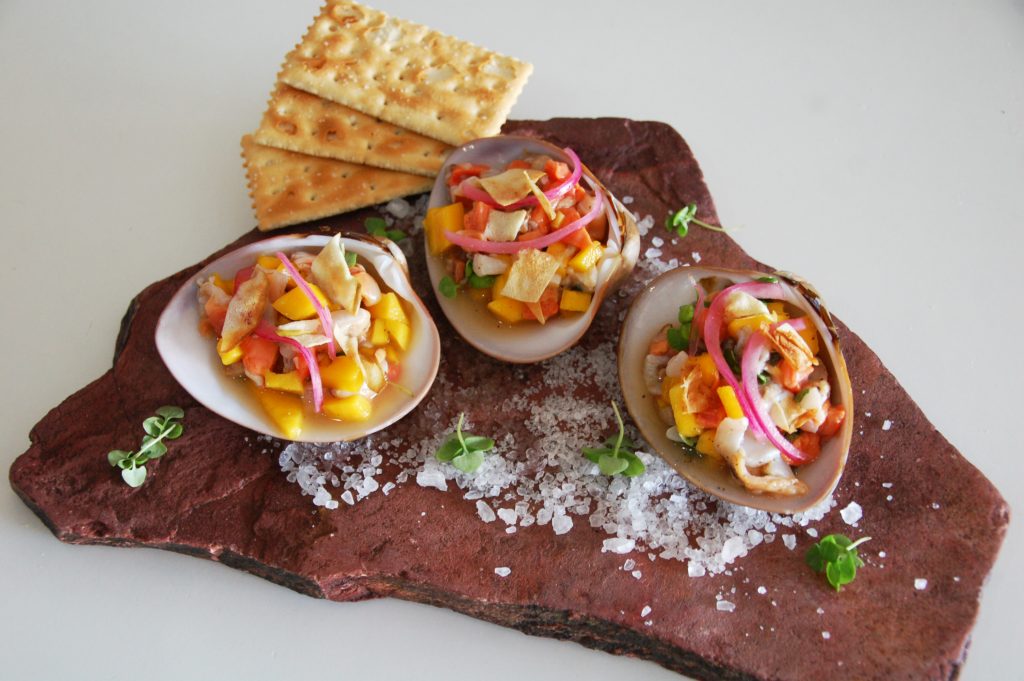 A graduate of the Tijuana Culinary Arts School, Rodríguez earned his mariscos merit badge as chef de cuisine at the Banyan Tree Resort in Playa del Carmen. He then returned to Tijuana to open and operate Ombligio de la Luna, his food truck that specialized in birria de res (spiced and stewed beef).

Behind the wheel of that truck, Rodríguez learned more about the city’s unique mélange of calle He opened Navio Seafood & Drinks in 2013 with his father and brother and a simple, localized mission statement, “My inspiration is found on the streets of Tijuana. What we do at Navio is to bring the street flavor of the carretas (food carts) into a more comfortable and clean environment.” 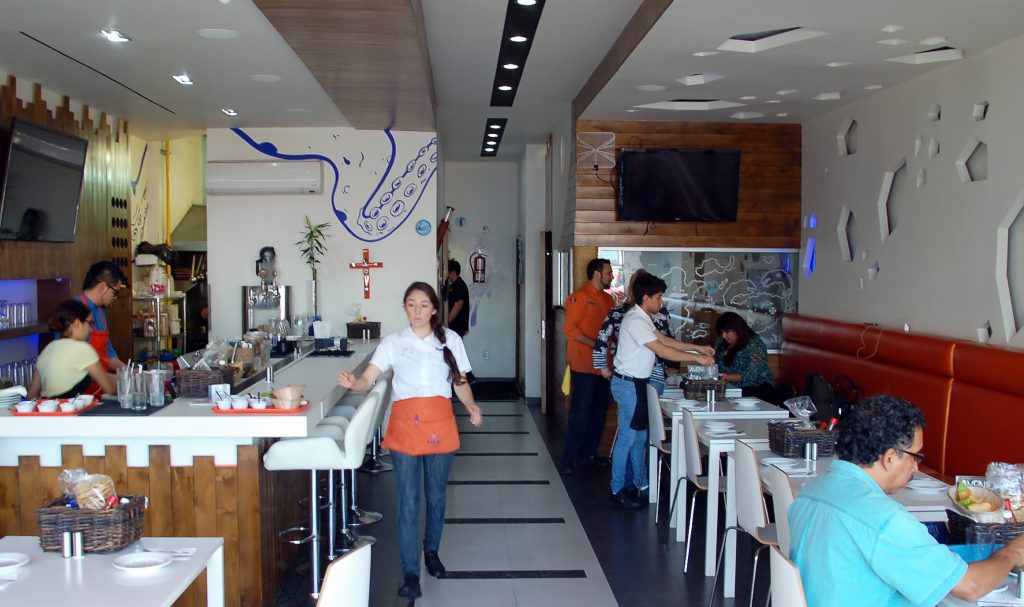 An example of Rodríguez’s Sonoran/Tijuanense fusion is his tiradito of callo de hacha. This classic Mexican seafood dish careens into Tijuana’s fruit salad vendor carts, resulting in a fresh and unique explosion of ingredients and flavors – watermelon, jicama, mango and a squeeze of lime are added to a plate of firm, fresh and succulent raw scallops.

Navio also serves an al pastor octopus taco inspired by the Tijuana taquerias (taco stands) – substituting pulpo for pork and finishing the dish with a house-made pineapple and habanero marmalade. Other dishes that we sampled were prepared in a similar spirit. 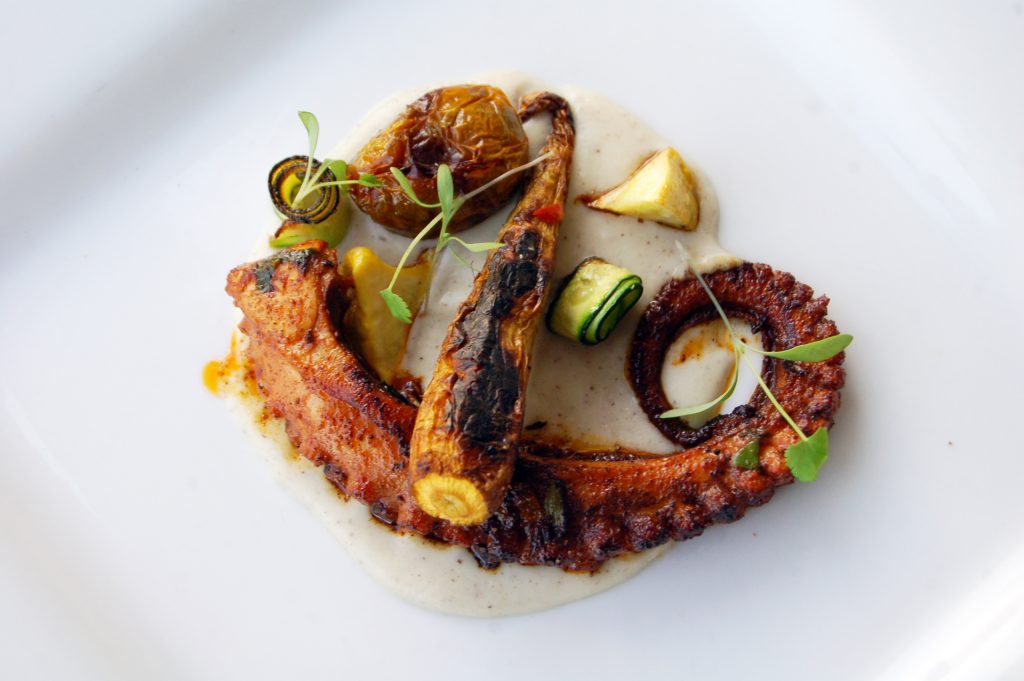 In addition to Sonora, other traditional Mexican dishes also do the “Tijuana Twist” at Navio. Chef Rodríguez’s Poblano taco is inspired by Puebla’s enchilada dish, but smoked tuna is substituted for chicken, and tomatillo is used instead of the typical Poblano chiles for the sauce. 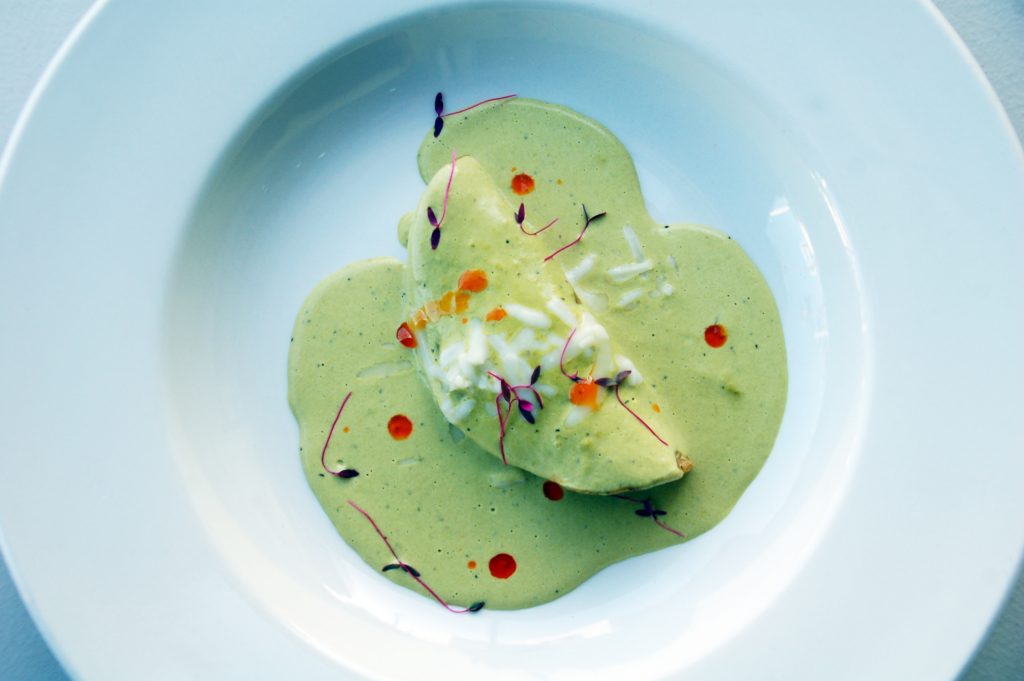 Rodríguez explained, “I love Mexican food and am always learning new things. There are many regional differences. In southern Mexico, they eat one way, in the center there are many traditions, and here in the north, we do things differently as well. That’s the beauty of our national cuisine.”

For all of their dishes – like so many restaurants, stands and trucks in Baja California – Navio only works with local ingredients, including the freshest seafood from the Pacific Ocean and the Sea of Cortez. 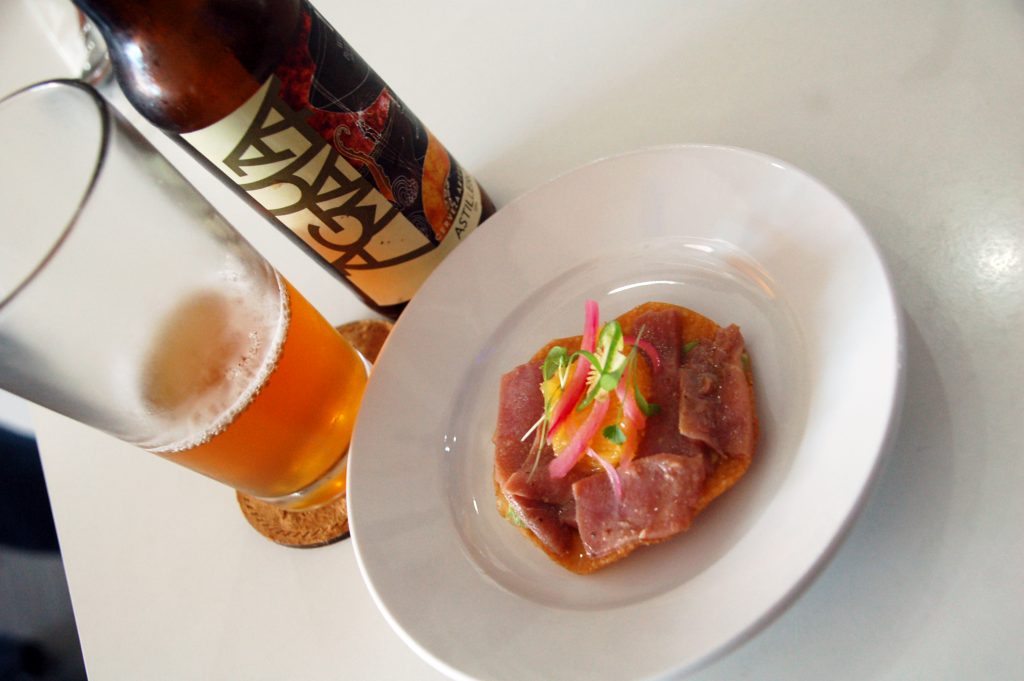 Navio pays homage to their seafaring suppliers in the restaurant’s color scheme, identity and interior space. There’s a graphic, Lichtenstein-esque mural of sea blue octopus tentacles snaking along clean white walls. Reclaimed planks of wood emulate a ship’s hull and adorn the raw bar as well as the wall behind it.

And – parents take note – there’s a ship themed playroom for the kids at the back of the restaurant where they can play happily while you enjoy your meal in relative peace. 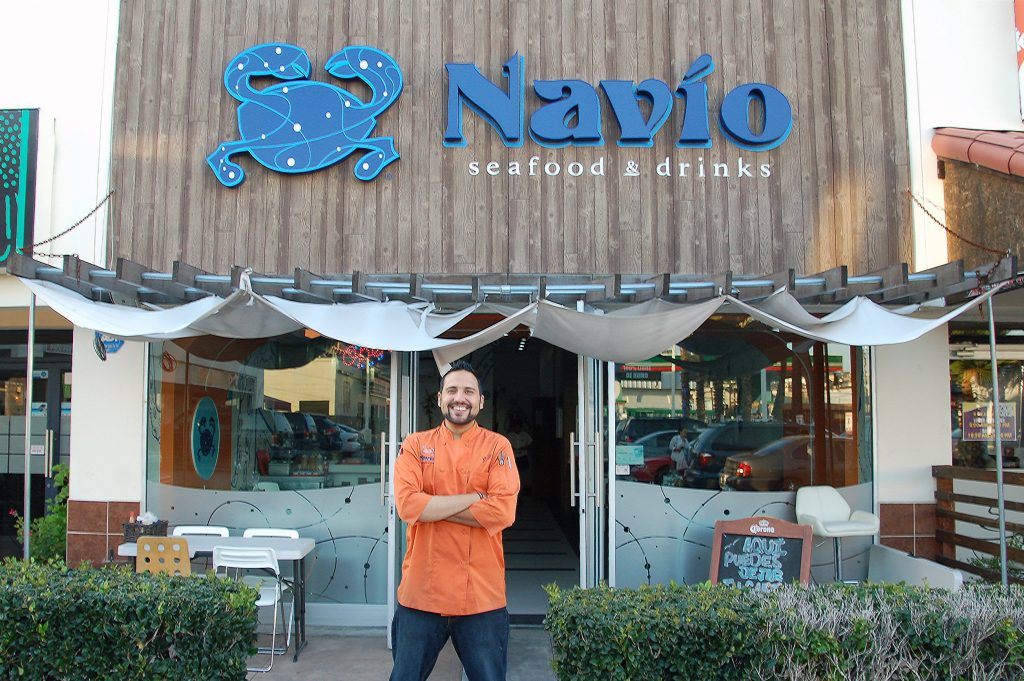 As we neared to the end of our conversation – and seven courses of seafood paired with Baja California wines and craft beers – Rodriguez concluded, “We call the restaurant Navio, like navigation. Early fishermen found their way home by the stars, so we have a constellation in our logo. We want our customers to navigate, or find their way here. And to consider Navio their home.”

DISCLAIMER: My party and I were invited as chef Julio’s guests to dine at Navio Seafood & Drinks. The chef generously picked up the tab for us on this occasion. My opinions are my own, and no compensation was received from the restaurant or its affiliates for writing this article.