PLAYAS DE TIJUANA, B.C. – When thinking of sushi on the west coast, Tijuana may not spring to mind as a destination for the Japanese specialty as do north of the border raw meccas San Diego, Orange County and Los Angeles.

After all, Baja California’s largest city shares the same urban population, Asian influence and proximity to the sea as Southern California. And with a regional culinary adherence to the use of local, sustainable ingredients, sushi in Baja California rivals and often beats it’s north of the border counterparts in freshness and imaginative fusion preparations.

Koi Sushi in Playas de Tijuana, the city’s beachside community, was recommended by amiga Patty Villareal of Popotla-based Think Blu Seafood. And since Patty supplies the Bluefin tuna for their otoro (tuna belly) and maguro, a visit was inevitable. Think Blu has a solid reputation throughout Baja California for their super-fresh product.

As it turns out, there is a California connection. Chef Yaron del Moral, originally from Ensenada, opened Koi Sushi with his wife in September 2014 after spending two years as sushi chef at Rock and Roll Sushi in Carlsbad. “The owners of Rock and Roll Sushi actually helped us open in Tijuana,” the young chef indicated as he was slicing up an order of hamachi nigiri. “They saw the potential of a good sushi restaurant here in Playas.”

Koi Sushi is located in an inconspicuous strip mall on Paseo Pedregal. Our party of ten filed in to the small restaurant, taking up about a third of the dining area. Don’t expect high Asian décor here. The space is minimal and sparse, but the focus here is on the food.

Sushi accouterments are a bit different in Mexico. The typical green-capped carafe of soy sauce contains the salty liquid mixed with a bit of lime. An additional bowl of soy is provided with chopped jalapeño floating on top. My Mexican dining companions laughed when I took a bite of the jalapeño. The chilies are present just to give the sauce an extra kick, not to be eaten.

The biggest difference is the wasabi. In place of the typical concoction served stateside – a mix of horseradish, mustard, cornstarch and green food coloring – is a small bowl of real wasabi grated and mixed in a gelatinous base. As wasabi root is usually expensive and not easy to find, this was a treat and my first time with the real root. Still packing a nice bite, real wasabi has more of an herbal, piquant taste and complements the fish without overpowering it – as its horseradish and mustard surrogate often does. 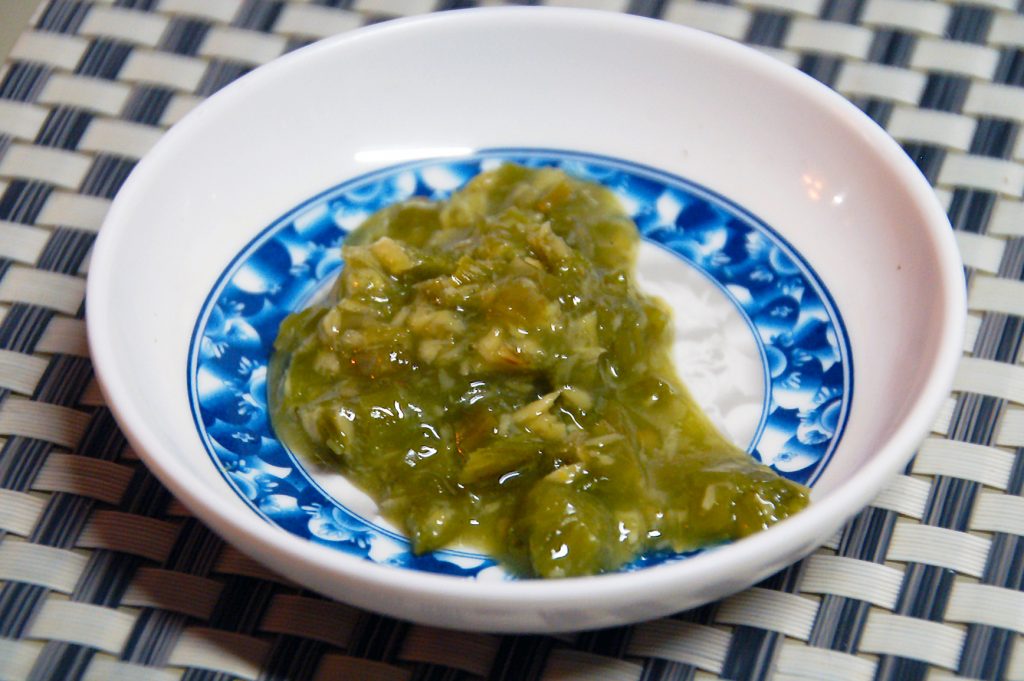 To start, the kitchen sent out several orders of hongos especiales (special mushrooms) stuffed with smoked marlin. The mushrooms are quickly and lightly coated with a thin layer of tempura, leaving them firm and snappy and providing a nice counterpoint to the soft, savory chunks of smoked marlin within. 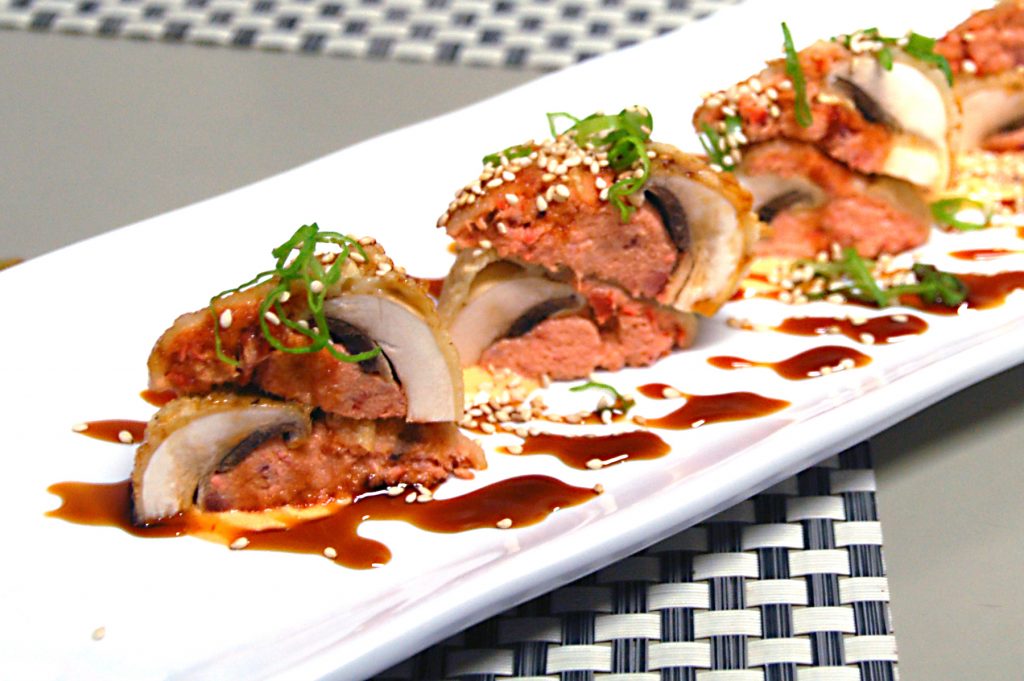 Next up were several of the house’s specialty rolls. The spicy tuna roll is bursting with diced Bluefin and a mildly salty tabiko(flying fish roe). The top is slathered with spicy aioli and sprinkled with sesame seeds and thinly sliced scallions. The combination of Saracha and chili in the aioli turns the heat of this tuna roll up to eleven (I exaggerate, but there did seem to be more power here than in the SoCal equivalent). 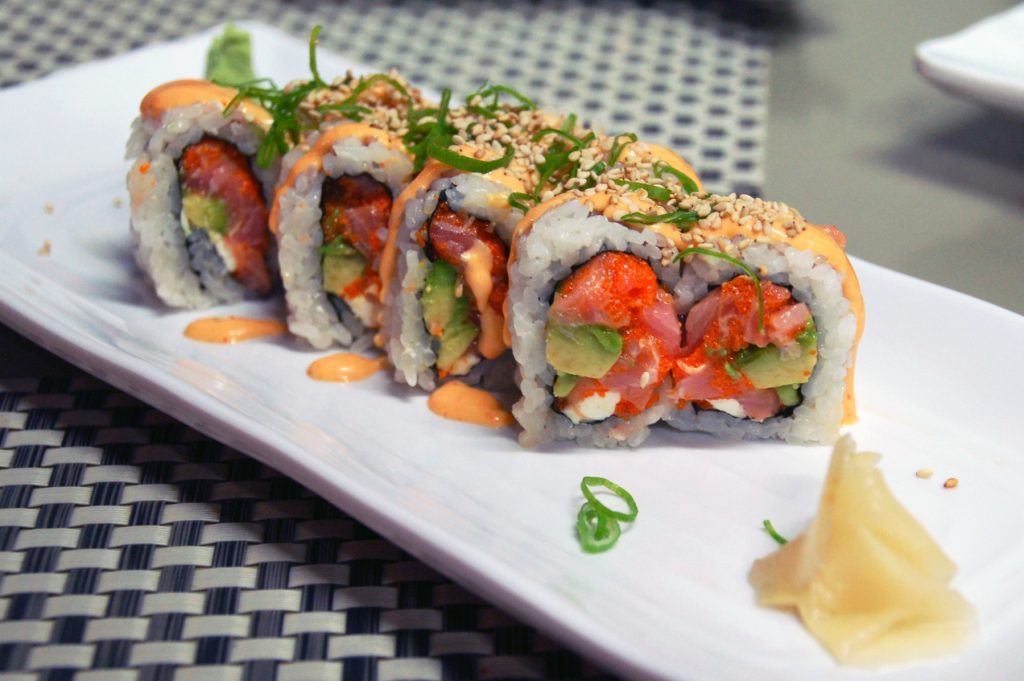 Even better is the lemon smoke roll, which is lightly coated in tempura and contains cream cheese, avocado and unagi (eel) on the inside. The eel sauce provides the “smoke” in the dish’s name. The roll is sliced and then topped with a thin slice of lemon, salmon and spicy tuna, then sprinkled with scallion and sesame seeds. 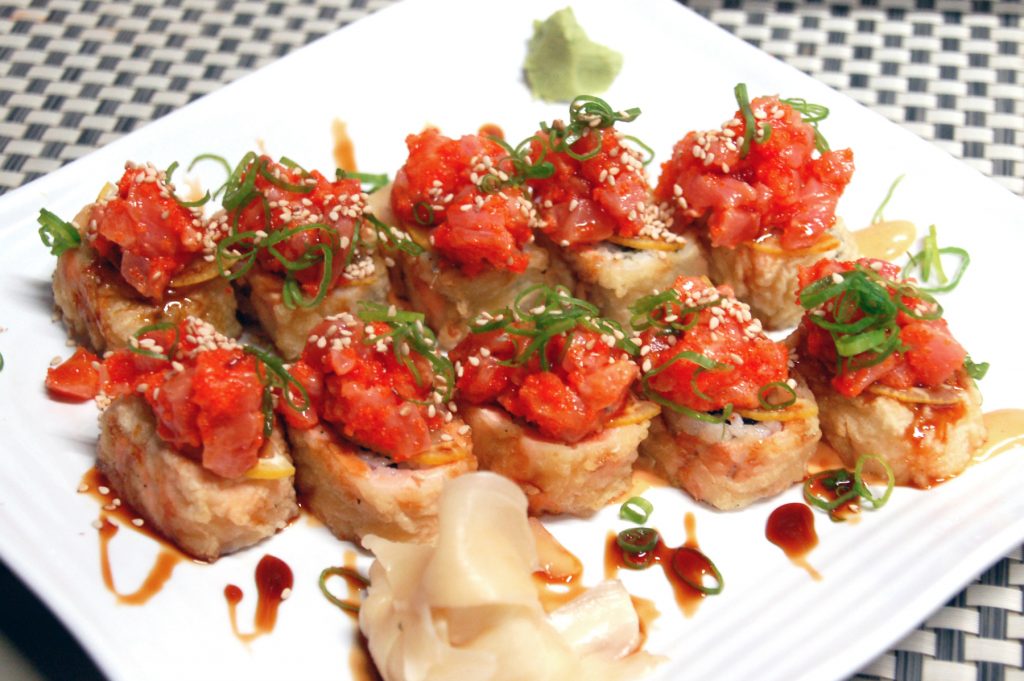 We intervened the onslaught of raw with the chef’s last available order of Hamachi kama.The generous yellowtail collar was grilled to perfection and served over a nice, fresh bed of green salad. This dish didn’t last long and we loosened our belts for the next round of nigiri sushi. 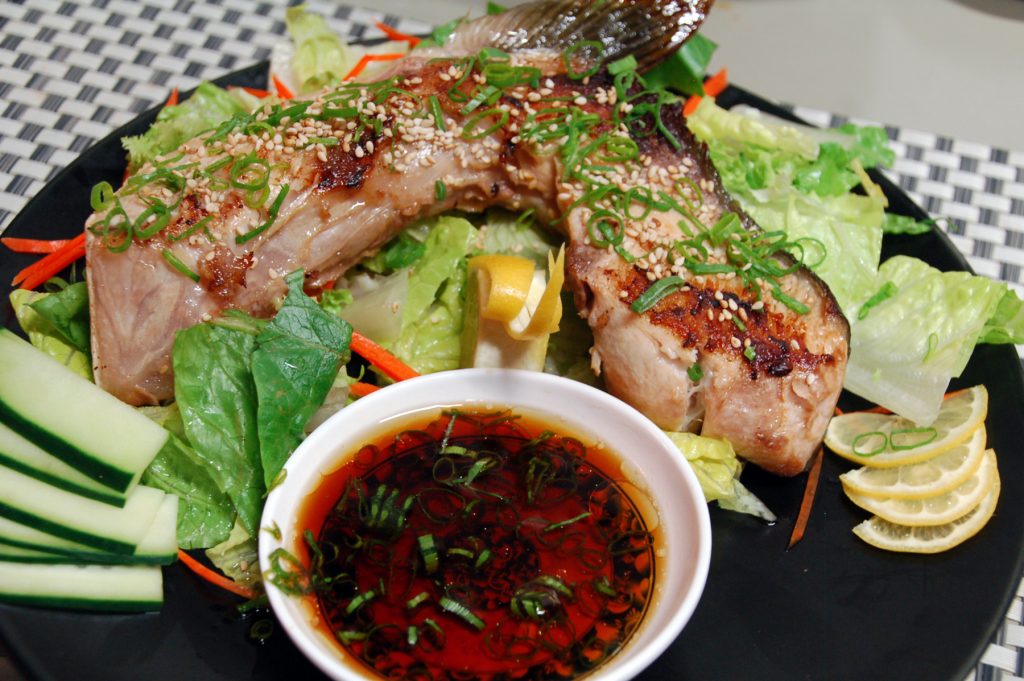 The nigiriis the star at Koi Sushi. The otorois succulent, tender and topped with a small dollop of real wasabi. There’s really no reason to even think about dipping this in soy as the taste of the fish is clean, very buttery and best appreciated unadulterated. Myhamachiwas “…just swimming in the ocean this morning” and some of the best I’ve had. And Think Blu Seafood’s deep red, meaty magurois in a league of it’s own. 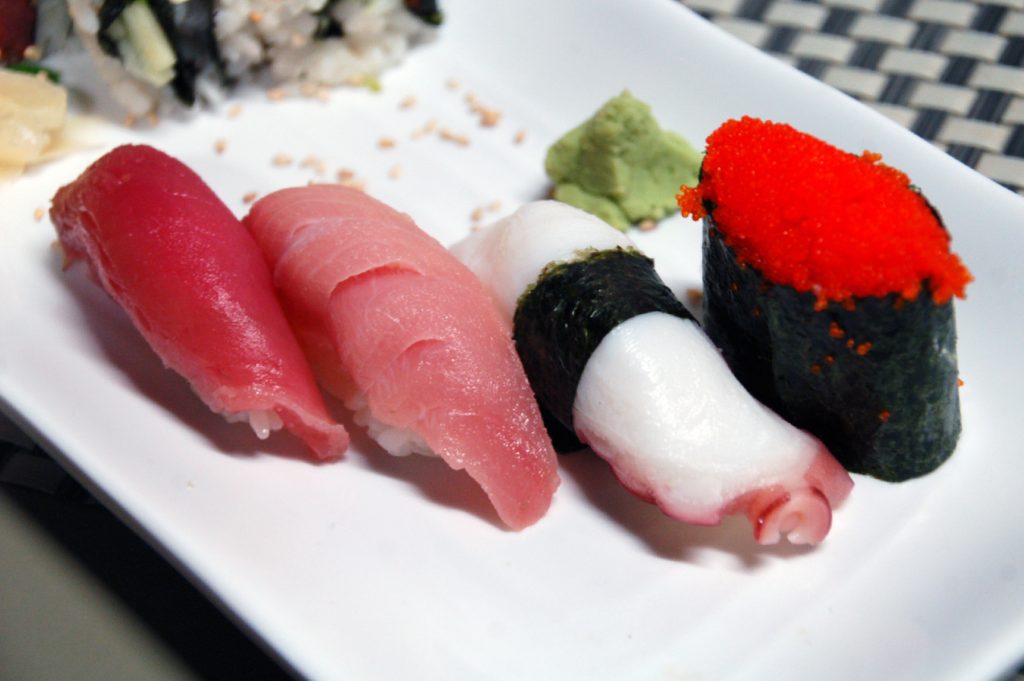 After desert – ice cream topped with tempura banana – we chatted with Yaron and settled our bill. Here’s another advantage sushi in Tijuana has over Southern California– each diner’s share was $280 pesos (about $18 US), including tip. I can’t remember ever having paid so little for so much, especially given the quality, variety and sheer volume of sushi we consumed.